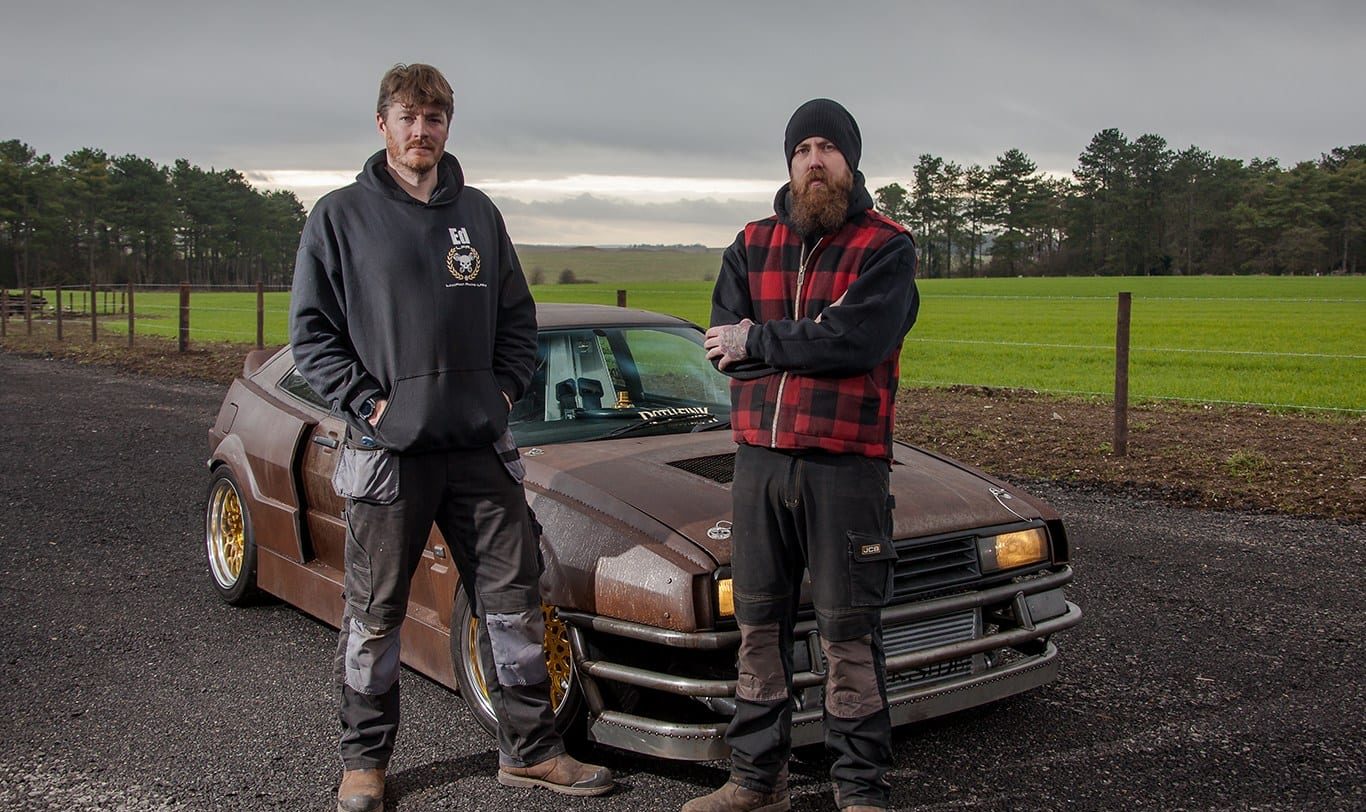 Some of you may know the car and owner Ryan Hatcher, and have seen it’s changes over the years. This once subtle looking VW Coupe has been transformed into something that is ready to take on a zombie apocalypse. OEM purists may wish to look away now, but this was originally a genuine Corrado G60 in really nice condition, before he decided to go full-on with it. Now a custom fully fabricated wide body 91 Volkswagen Corrado G60 with diesel turbo engine swap and dual turbo.

When it came to us it was a work in progress already sporting the genuine rust look. The body work had been taken back to bare metal, acid washed and left for a few years to create the patina look. The Corrado sits static on SPAX coilovers and features a remapped PD130 engine with Darkside Developments fmic, GTB turbo, egr delete, alloy radiator and straight pipe bonnet exit exhaust. It also has an uprated fuel pump and 5 speed G60 gearbox… Yes this was a g60 corrado… and no he doesn’t care!

He was after some custom fabrication so the wide body was made to fit the custom two piece WORK SEEKER CX 17×9 wheels wrapped in TOYO R888 tyres. The idea was to remove as much plastic as possible so the bumpers had to go and steel tube was used instead. The stock boot was ugly so that got cut out and a flat fabricated one was made to also hang the ali race fuel tank.

The plastic front grille was thrown and a steel replica made. Big box sills now flank its sides. A large front mount intercooler was fitted with custom ali boost pipes. A huge amount of work went into perfecting the shape, which involved carefully bending pipework so that it all flowed together. We carried out a huge amount of custom fabrication including fitting the extended arches, which involved cutting up a second Corrado shell to get the necessary parts.

Now it’s mapped up and compound charged… yes that’s two turbo’s on the little diesel ???? with a max boost of 2.5bar from 3000rpm. Set at low boost for now to save the poor clutch from the torque. When you crank up the lump, there’s a puff of smoke from the bonnet, like you’d get from a big old American Peterbilt truck. The turbo whistles away and there’s a fantastic bark from the bespoke Ramair filter.

We finished the once ‘VW Corrado’ off with some subtle tweaks under the bonnet to tidy things along with replacing the front, side and rear windows with lexan.

Huge thanks to Ryan Hatcher for letting us be a part of his extreme creation; you can follow him on Instagram

!735i! Yes that's right people 735 needs a lot of love but the owner "pete" of over 20 years knows what he's got so this beast will be great again with our help ... See MoreSee Less

135i full custom exhaust. Race cats installed with a 3.5” rear section. This car is absolutely stunning and very clean underneath! ... See MoreSee Less